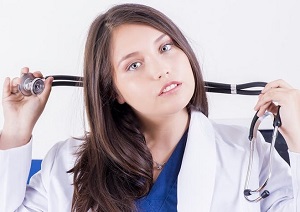 Q- A patient represents to the ER with anaphylactic shock. Epinephrine is given to the patient. Which one of the following adrenoreceptors mainly mediates bronchial muscle relaxation?

Q- Folic acid is given to pregnant women to decrease the risk of having a fetus with a neural tube defect. This treatment is a cofactor of which one of the following processes?

B- Biosynthesis of nucleotides

B- Biosynthesis of nucleotides- Folic acid play an important role in the synthesis of DNA, methionine from homocysteine and modification of DNA and RNA.

Q- Gentamicin is added to penicillin in the treatment of infections caused by viridans streptococci. Which of the following is the mechanism of action of this antibiotic?

A- Binding to the 30S subunit of bacterial ribosome

A- Binding to the 30S subunit of bacterial ribosome- B is the mechanism of action of tetracycline. C is cefalexin and D is ciprofloxacin.