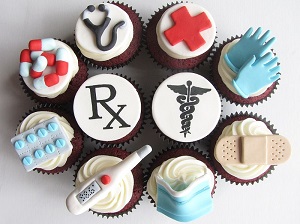 Q- Extrapyramidal side effects develop after the use of haloperidol due to its effect on which of the following receptors?

B- Dopamine receptors- Due to its action to block dopamine receptors, haloperidol administration may cause extrapyramidal side effects such as Parkinsonism-like syndrome, akathisia, dystonia and others.

Q- Which of the following is the main action of carbidopa when it is used in combination with levodopa in the management of Parkinsonism?

A- It increases the absorption of levodopa

B- It increases the permeability of blood-brain barrier to levodopa

C- It inhibits the conversion of levodopa to dopamine peripherally

D- It reduced levodopa side effects such as hypotension

Q- Which one of the following anti-hypertensive medications is contraindicated in pregnancy?

D- Ramipril- ACE inhibitors are teratogenic and they can damage the fetus. Other listed drugs are safe to use during pregnancy.